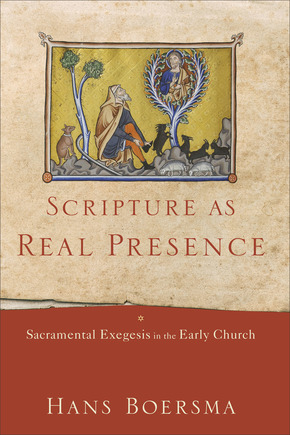 Scripture As Real Presence is an exercise in retrieving early Christian metaphysics. In simpler terms, Hans Boersma shows how early Christians viewed the Bible as a book that pointed to deep truths. The Bible is a sign or sacrament that points to a deeper reality.

Boersma explains it in this way: “I have long been convinced that the notion of sacrament should not be limited to the ecclesial rites of baptism and Eucharist. My Christian Platonist convictions persuade me that everything around us is sacramental, in the sense that everything God has created both points to him and makes him present” (1).

Boersma’s aim is not simply to retrieve the past, however. He wants to make the past relevant for the present: “my aim is to make clear why patristic readings of Scripture continue to be relevant” (17). He goes on to explain: “I limit myself to the argument that a sacramental reading of Scripture lies at the heart of patristic interpretation, and it is this common patristic sensibility that I am convinced the church needs to retrieve today” (17).

Overall, Boersma’s work is a helpful overview of early Christian metaphysics, albeit with significant flaws.

What Is Sacramental Reading?

According to Boersma, these four features describe Patristic sacramental reading of the Bible.

Features 2-4 seem to make sense of the Bible and how we should read it. The Bible does transform readers who meditate on it. The longer one is a Christian the more one is able to understand the riches of God’s word. God’s providence over the world and Scripture allows us to see connections  between Biblical books and between the two testaments. I doubt everyone would agree with all the particulars of these three points, but they all seem to make sense when one considers the Bible.

But I don’t think that is true when it comes to Boersma’s first feature. He argues that Patristic sacramental reading does not look for one meaning of a text and that a text has infinite meanings.

He basis this latter point partly on a passage from Augustine in which Augustine speaks of multiple interpretations in his Confessions (18-19). Augustine proposes that we can read three, four, and even more truths in the Genesis account. But then he  makes the point: “why not believe that Moses discerned all these things?” (18). To my mind, Augustine is simply saying that Moses could have intended a wide range of meanings in his writings; but that wide range is not infinite. Moses is a brilliant author who can intend to communicate more than one idea.

It seems to me, then, that Boersma is over-reading the evidence, at least the evidence that he quotes in his discussion on infinite meaning in the Bible (18-19).

I have also spent some time reading early Christian literature. And the idea that they believed the Bible contained infinite meanings seems unfounded. Of course, they did not view meaning as strictly as we do today, and they were much more comfortable reading the Bible through a theological lens than we are today. But they always searched to understand the truth, which was in the Bible. And meaning was limited to what Scripture said.

I wonder if Boersma is perhaps confusing meaning with significance. A text can have one or a range of meanings that entail numerous kinds of significance. Jesus died (meaning) might entail that a person remembers his death fondly, or with guilt, or with anger, or with whatever kind of response that this person has. This does not change the meaning of the statement: Jesus died. It simply means that there many ways that a text expresses its significance in the life of a reader.

Whatever is the case here, I am not convinced that Boersma has used Augustine rightly nor that he is using the language of “meaning” precisely.

Boersma has, nevertheless, written  an insightful reflection on early Christian interpretation of Scripture. His challenge to revisit our metaphysics and his courage to state his positions are to be commended.

His work covers Origen, Gregory of Nyssa, Augustine and many more interpreters. Boersma advocates that readers should embrace the sensibility of the early church. But in so doing, he has sometimes overstated the case—as I noted when he interpreted Augustine.

But Boersma seems to dismiss the idea that any justification of OT is, well, justified (111). But is Origen’s spiritual reading of the violence a better way forward (cf. 120)? Should we read Joshua conquering the enemies in Canaan as Jesus conquering our sin (120)? Even if we grant that we can read Joshua in an allegorical way, does that mean that the literal sense of Joshua is un-Christian?

This review is not the place to argue one way or the other in any comprehensive way. But suffice it to say, I find endorsing Boersma’s retrieval of Patristic sensibility when it comes to violence in the Old Testament unhelpful.

Read Boersma to learn, to be challenged, and to gain a handle on the sacramental reading of the Scripture in the early church. Boersma has not converted me to his position, but he has challenged me to think through mine. And that’s a good thing for us as readers. Boersma will also challenge you to think about why you view reality the way you do (metaphysics).

I believe in the project of retrieval, but I think we must be critical of what we retrieve from the past. And this means we can be critical of Boersma’s project to retrieve the metaphysical sensibilities of the early church.

Disclosure: I received this book from Parasource Media, but I was under no obligation to give the book a positive review.