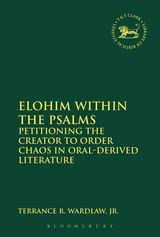 Terrance Wardlaw contributes to the burgeoning field of canonical Psalter scholarship. The canonical approach to the Psalms takes the Psalter to be an organized work with signs of editorial arrangement. Wardlaw’s specific contribution to the field is to clarify how the Psalms use the epithet Elohim.

Wardlaw proposes that the reason why Elohim appears in the Psalter involves a theological judgment rather than merely a redactional explanation (e.g., YHWH was not used when the Elohistic Psalter was composed).

As part of his argument, Wardlaw engages with John Miles Foley’s performance theory in relation to oral-derived cultures (18). In oral-derived cultures, names (or the like) evoke a whole setting of ideas and emotions. The meaning of a name can go beyond the line in which it is found; it can evoke an entire cultural repository of meaning (cf. 21). Applied to the Psalter, the name Elohim may carry a whole set of associations, which authors associate with the name Elohim when they use it.

Wardlaw does not believe that he commits what James Barr calls the illegitimate totality transfer fallacy (which is when someone applies every possible meaning of a word into one context). Oral cultures are more likely to bring in the “totality of an epic tradition” even within one passage (21).

Wardlaw further believes that the epithet Elohim functions as an organizing principle for the Psalter (156). And he argues for such throughout the book.

Wardlaw probably overreaches in some of his canonical claims. For example, he claims that Psalm 50 “provides theological preparation for the following psalms of David (Pss 51–72)” (159). Canonical approaches to the Psalter have surely advanced or rather retrieved a beneficial way of reading the Psalms. But I am hesitant to affirm theses that are this specific. The Psalter is a poetic work that does not contain the same close-knit logic of a New Testament like Romans.

At the same time, Wardlaw does propose that oral cultures have a repository of culture from which to draw. This might mean that Psalm 50 introduces ideas that are loosely evoked in the following Davidic psalms. This sort of reading, if that is what Wardlaw intends to convey, supplies explanatory power to canonical studies of the Psalter.

Other than a possibly too specific reading of the Psalter, Wardlaw’s argument generally succeeds. His exegesis of texts that use Elohim and especially his connection of the name Elohim to earlier Pentateuchal traditions (e.g., within Genesis 1–2 and Exod 20–22) are convincing.

Academics and interested Christian leaders should read Elohim within the Psalms to gain a better appreciation for the theology of the Psalms. Wardlaw’s interpretation of Elohim in the Psalter is convincing and will benefit readers.

Bloomsbury provided me the book for review, but I was under no obligation to provide a positive review.